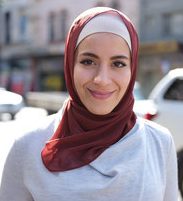 Sara Mansour is the co-founder and director of Bankstown Poetry Slam. As a practising lawyer and also a performing poet, she uses her practise and her art to shed light on issues of political and social importance. Sara has been recognised for her achievements, winning the Young Citizen of the year in the Canterbury- Bankstown region and also Outstanding Youth Leader at the ZEST Awards in 2017. In 2018, she was selected to be a mentor for the Sydney Writers Festival Youth Curators program, and also delivered a TEDx Talk in Parramatta on the inception of the Bankstown Poetry Slam. In that same year, she was selected to partake in the Youtube Creators for Change project, alongside other members of the Bankstown Poetry Slam group. In 2019, she was selected as a writer for the upcoming ABC iView show Halal Gurls, and was nominated for the Young Woman of the West Award.